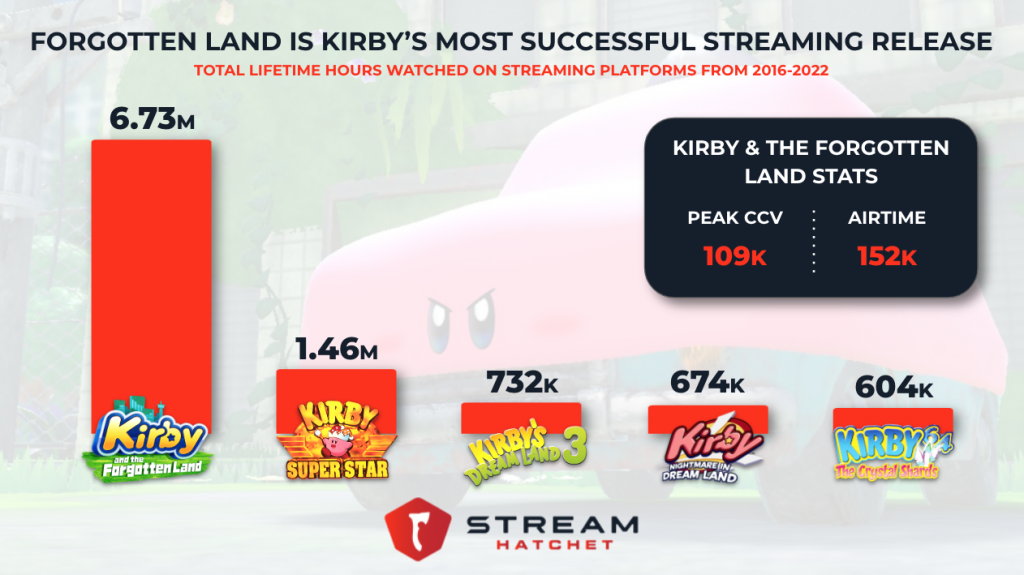 Nintendo’s Kirby franchise has been around for three decades and has been sucking in players from all over the world. However, when it comes to live streaming, the Kirby platformer games have never been at the top of the charts. Until Kirby and the Forgotten Land.

The newest Kirby installment has already broken records for the most streamed Kirby game of all time. In its first three weeks of release, Kirby and the Forgotten Land has received 6.7 million hours watched. It also had a peak concurrent viewership of 109,000. Almost 19,000 unique channels streamed the game for about 152,000 hours.

About 74% of viewers watched Forgotten Land on Twitch, with about 23% on YouTube Gaming. The top three streamers of the game are VTubers from YouTube.

Compared to other Kirby games, Forgotten Land is the most successful on live streaming by far. It taps into the popularity of 3D platformers like Mario Odyssey, Portal, It Takes Two, and others. The second most-streamed Kirby game is Kirby Super Star, released in 1996. Like other older Kirby games, it’s available in the Nintendo Switch retro game library. Since 2016, it has received just under 1.5 million hours watched on live streaming platforms.

While Kirby and the Forgotten Land’s 6.7 million hours watched isn’t anywhere near the recently released Elden Ring’s 170 million hours, the growth of the franchise is worth noting. The switch to a 3D platformer has reignited interest in the Kirby franchise among live streamers globally.

For more insights in your inbox weekly, sign up for our newsletter.