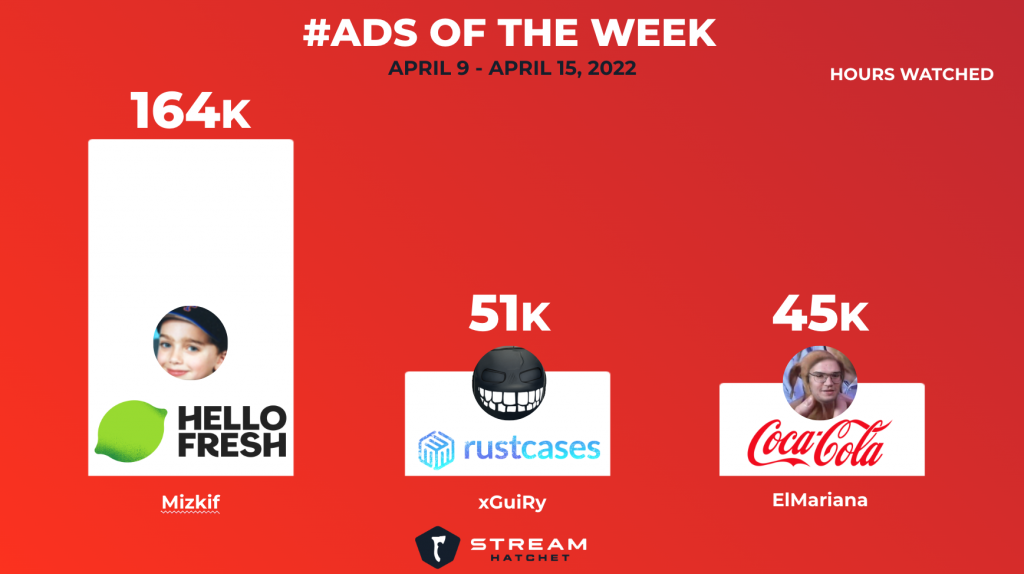 Topping the #Ads of the Week charts this week were Mizkif with Hello Fresh, xGuiRy with Rustcases, and ElMariana with Coca-Cola.

In first place, Mizkif dominated the charts with his sponsored stream with HelloFresh, the meal-kit delivery service. Mizkif did a live cooking demonstration on his stream, preparing a HelloFresh meal kit with Emiru and Nmplol. His stream garnered over 164,000 hours watched with a peak concurrent viewership of 56,144.

HelloFresh has been increasingly active in the Twitch advertising space this year, working with more and more streaming influencers each month. In the first half of April, the number of unique channels HelloFresh is working with is already up over 500% from all of January, going from 139 to 857 channels. Additionally, 6.7 million hours of HelloFresh sponsored content have already been watched in the first two weeks of April.

In second place for #Ads of the Week is xGuiRy, a Spanish streamer who was sponsored by Rustcases, a Rust drops and case opening site. His sponsored stream last week received over 50,000 hours watched with a peak concurrent viewership of 6,500 viewers.

In third place was ElMariana, another Spanish streamer, with his sponsored stream from Coca-Cola. The stream garnered 45,000 hours watched with a peak concurrent viewership of about 40,000. Coca-Cola has partnered with some Twitch streamers to promote their new Coca-Cola Zero Sugar “Byte” flavored drinks, which are said to be “inspired by the playfulness of pixels.” To promote the product, they partnered with Fortnite on an exclusive island, Pixel Point, that features multiplayer mini games which ElMariana played on stream. They also created a separate augmented reality (AR) game, telling the story of Byte in the metaverse.

Coca-Cola has been increasing its presence online and in live streaming in recent months, as they became partners with Riot Games in League of Legends’ Wild Rift and Wild Rift esports. In 2021 they launched an NFT, their first dive into the metaverse. It will be interesting to watch their progression in live streaming and the metaverse, and to see how Coca-Cola and other brands can make authentic, unique experiences for consumers in the metaverse in the future.

To learn more about how you can utilize Stream Hatchet’s data intelligence to improve your brand’s marketing capabilities, drop us a line!