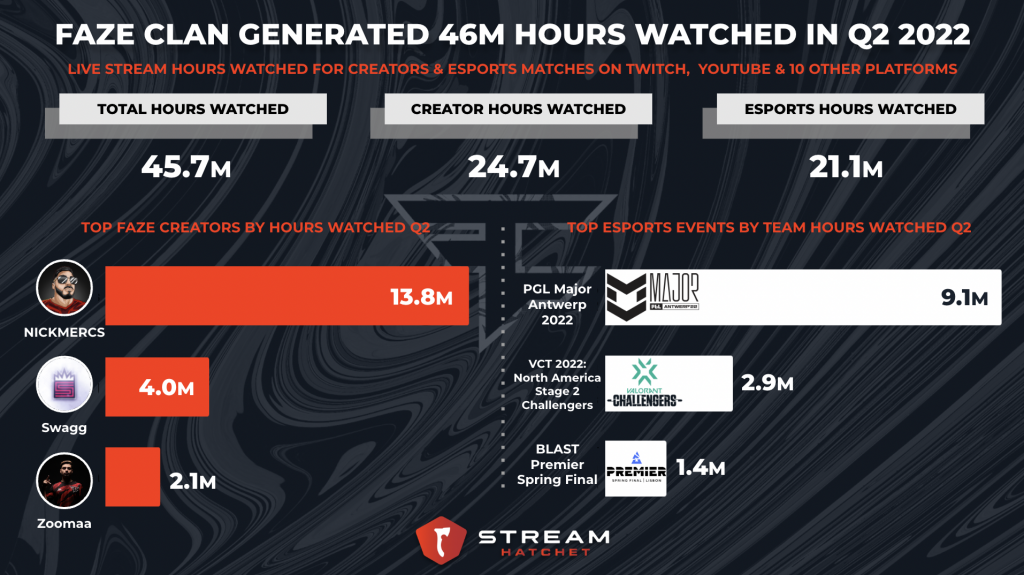 With their charismatic content creators and dominating esports teams, FaZe Clan has amassed an incredible fan base across live streaming as well as on other social media platforms. They’ve become a dominating force in the industry, drawing in major sponsors, including McDonald’s, GHOST Energy, Scuf Gaming, Doordash, and more.

FaZe Clan is a Top Esports Team in Live Streaming

Last quarter, FaZe was the third-most watched esports organization on live streaming platforms, behind only TSM FTX and T1. The org generated 45.7 million hours watched in Q2, with about an even split of those hours coming from both content creators and professional esports players: 24.7 million and 21.1 million hours, respectively.

With 93 creators and esports players specializing in dozens of games, FaZe has a streamer for everyone. NICKMERCS, FaZe content creator known for his Call of Duty streams on Twitch, dominated Q2 with 13.8 million hours watched. Swagg and Zoomaa, two other COD content creators for FaZe, had 4 and 2.1 million hours last quarter, respectively.

FaZe’s high-quality teams across multiple game titles makes them a dominating force in the esports industry. Their CS:GO team has 13 trophies and counting, and their other teams have 15 more between them. FaZe’s competitive ability and performance allows them to stay in tournaments for longer, generate more hours watched on live streaming, and convert more viewers into fans.

In addition, their sleek branding and powerful social media presence helps them connect with their fans and has allowed them to create a coveted group that has amassed a loyal following.

PrevPreviousLIVE STREAMING #ADS OF THE WEEK: JULY 16 – JULY 22
NextNIKE IS THE MOST PROMINENT APPAREL BRAND AMONG TWITCH STREAMERSNext