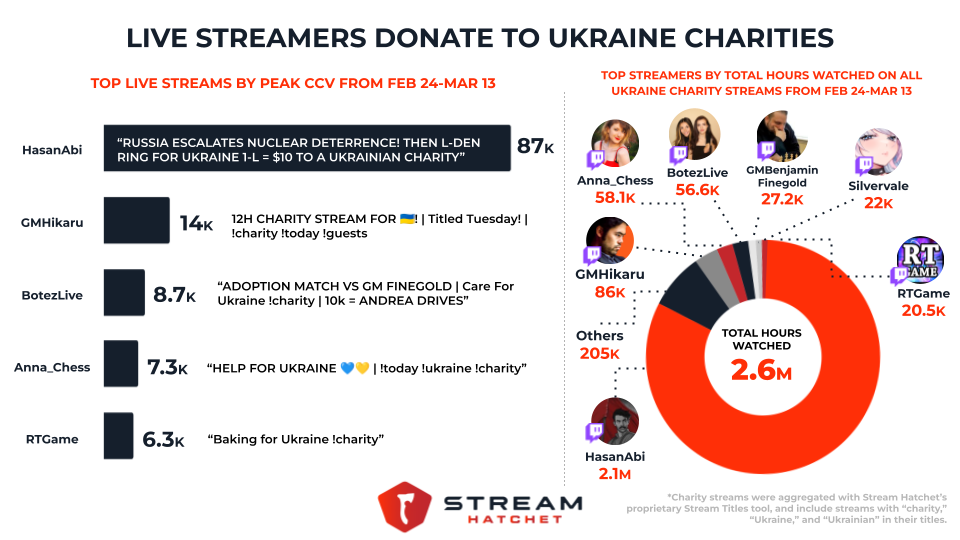 From the beginning of the crisis in Ukraine, news and discourse around the situation has remained prevalent on live streaming platforms. Since Russia began its invasion, some streamers have hosted live streams dedicated to donating money to Ukraine. They’ve played a variety of games and worked with different charities and companies to help manage donation interfaces, provide incentives to contributors, and more.

From February 24th, the first day of the invasion, through March 13th, there were a total of almost 700 separate live streams from 212 unique channels dedicated to donating to Ukraine charities. Over 1,500 hours of charity streams were broadcast, and garnered over 2.6 million hours watched.

Of the 212 streamers, HasanAbi had the highest peak concurrents on a single Ukraine charity stream with over 87k on February 27th. He also had the highest total hours watched on all of his streams over the time period with 2.1 million hours watched. HasanAbi, best known for his political commentary Just Chatting streams, also played Elden Ring during his charity streams for Ukraine. Every time he died in the game, he would donate $10, and encouraged his viewers to donate as well.

Four chess streamers had the next highest hours watched on their Ukraine charity streams. GMHikaru garnered 86k hours watched, Anna_Chess had 58.1k, BotezLive had 56.6k, and GMBenjaminFinegold had 27.2k. The Botez sisters’ most viewed stream came on Feburary 28th when they teamed up with Benjamin Finegold for a charity chess match on stream, garnering about 8,700 peak concurrent viewers.

GMHikaru had the third highest peak concurrent views on his 12-hour Ukrainian charity stream at 14,000 viewers. He also had the second highest total hours watched on all of his streams with 86,000 hours.

RTGame, an Irish variety streamer, did a charity stream with Softgiving to help raise money for the Ukraine Crisis Fund. In his 3.5 hour stream, he baked a cake while raising over $50,000. He had over 20k hours watched and had 6.3k peak concurrent viewers.

For more insights, sign up for our weekly newsletter.