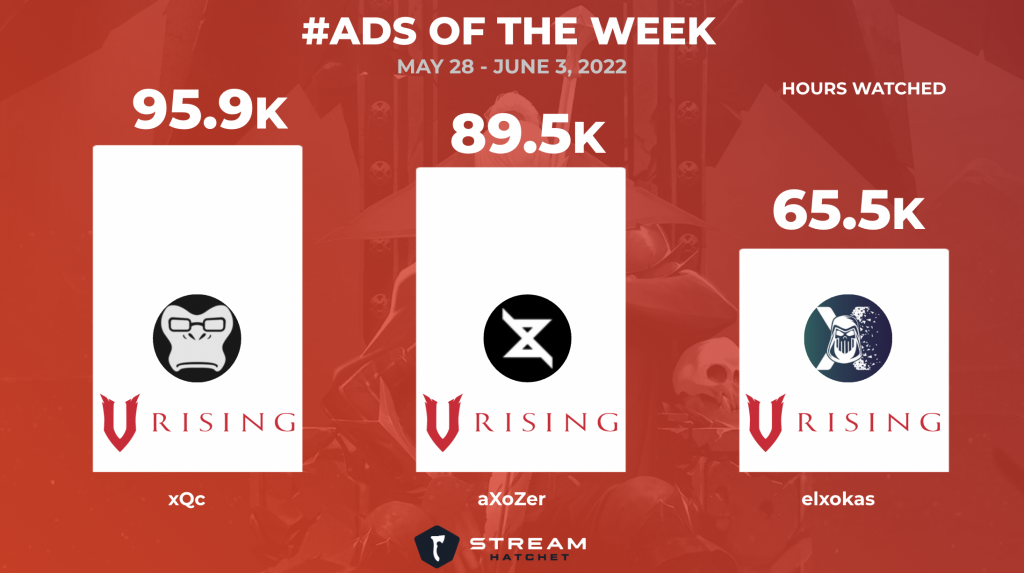 This week’s live streaming Ads of the week were swept by the new game release, V Rising. Stunlock Studios has partnered with several content creators on Twitch to promote their new game, released on May 17th of this year.

Sponsoring these three streamers was a strategic move for Stunlock Studios. xQc’s other sponsored streams with Stake.com have been doing incredibly well, averaging 300k hours watched with peak viewership up to almost 100k viewers. As the biggest English-speaking streamer right now, xQc’s audience is extremely large, and advertising with him reaches a broad group of gamers.

Stunlock also partnered with two Spanish-speaking streamers, aXoZer and elxokas, to promote their game. aXoZer and elxokas have smaller audiences than xQc, but their audiences are much different. xQc only shares 4-6% of the same audience as the Spanish-speaking streamers, meaning Stunlock is able to reach a more diverse audience by having these streamers play V Rising as well.

While aXoZer and elxokas share almost 16% of the same audience, their preferred streaming categories are pretty difference. Last month, elxokas streamed mostly Elden Ring, League of Legends, and Rust. On the other hand, aXoZer preferred Just Chatting and Valorant, and is more of a “variety” streamer.

aXoZer’s sponsored stream with V Rising also came just days after his record-breaking face reveal stream that had over half a million peak concurrent viewers and over a million hours watched. His audience grew significantly after that stream, breaking 2 million followers on Twitch.

Game studios and publishers should look to partner with a variety of streamers and content creators to promote their new game with live streaming ads. Having a wide array of languages, preferred categories, and streamer personalities can help spread a wide net and capture a diverse audience with your game. Partnering with the top three streamers isn’t always the best idea, as it is expensive and the amount of audience overlap is too great to get the best bang for your buck.

Having streamers with under 10% audience overlap is a good place to start, and then diversifying by language, game, and personality type are some next steps to take.

To learn more how your studio can use Stream Hatchet’s BI and custom reporting solutions to amplify your marketing strategy, send us a message!

Subscribe to our newsletter for more insights delivered weekly to your inbox.