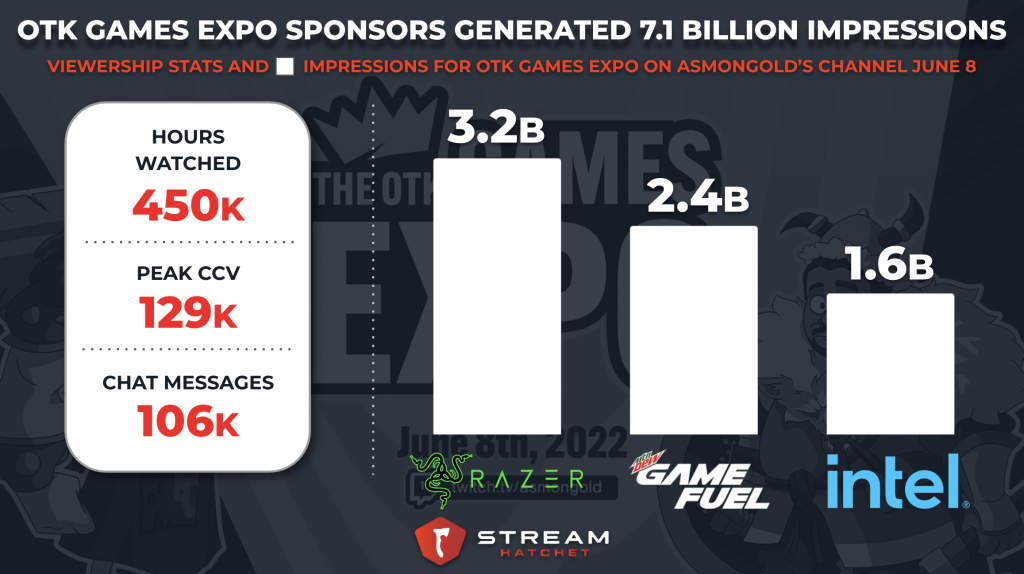 The content creation powerhouse will be able to use the LA esports arena, outfitted with VR and AR technology, to boost their streaming quality and event capabilities. In turn, the partnership allows WePlay to gain social traction with the influencer network, expanding its reach in its first dive into the American esports network.

In their first partnered event on June 8th, WePlay hosted the OTK Games Expo in their arena, their first externally-hosted event.

Asmongold, an OTK member, hosted the Expo and streamed it live on his Twitch channel. The five-hour stream garnered 450k hours watched and peaked at 129k concurrent viewers. Viewers sent over 105k chat messages on Asmongold’s channel, with an average of 444 messages sent every minute.

Along with WePlay, the Expo was sponsored by Razer, Mountain Dew GameFuel, and Intel. The three sponsors had their logos rotating on screen throughout the stream, as well as broadcast onto the television screens and facilities at the esports arena. Over the course of the Expo, the three sponsors garnered over 7.1 billion impressions for their logos.

Razer came out on top with 3.3k exposures and 3.2 billion impressions. Their logo was on screen for just over 3.5 hours of the 5-hour stream.

Mountain Dew Game Fuel had 2.2k exposures with 2.4 billion impressions. Their logo was on screen for 3 hours and 12 minutes.

Intel saw 1.4k exposures with 1.6 billion impressions during the stream. Their logo was on screen for 2.75 hours.

Chat engagement varied for the three brands, however, with Mountain Dew Game Fuel garnering the most chat mentions of the three brands with 313 messages. Razer had 211 mentions and Intel saw 137 chat messages.

Chat with us to learn how you can leverage Stream Hatchet data to track your brand impressions during live streaming and esports events. We provide a powerful Business Intelligence Tool fit for any size team, as well as do custom reporting for Brands, Marketing Agencies, Tournament Operators, Game Publishers, and more.

Subscribe to our newsletter for weekly insights delivered directly to your inbox.