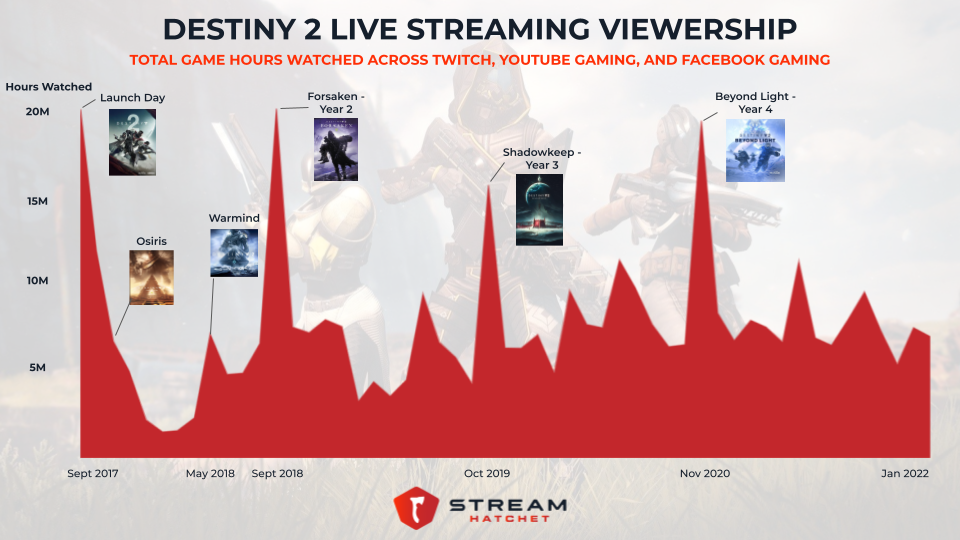 Bungie, the creator of the Destiny franchise, was recently purchased by Sony Interactive Entertainment, with the stipulation that Bungie will remain independent and games will continue to be multi-platform. So what benefits will Bungie and the Destiny franchise bring to Sony?

Sony most likely sees the benefit of a live service game like Destiny that keeps players coming back for paid downloadable content. Instead of relying on completely new game releases and marketing new games to players, Bungie utilizes their already existing fanbase and offers new storylines within the same game, most likely a selling point for Sony.

However, since Bungie’s split with Activision in early 2019 and their change to seasonal DLC releases, Destiny 2’s relevance on live streaming platforms has maintained consistency and seemed to have even increased average hours watched. While the peaks might not reach as high as they did on release day and in year 2, the game has amassed a more consistent watch time in recent years.

From the data, we can see that Destiny’s fanbase is a loyal one, coming back season after season to watch live streaming content of the new DLC from their favorite streamers.

This next chart highlights the live streaming hours watched for the two most popular Sony games each year. Live stream viewership for those games peaks upon their release, but tends to drop off dramatically after about a month.

For example, God of War live stream viewership peaked at about 22 million hours watched upon its 2018 release. However, those numbers dropped to six figures until its PC release in 2022. The same can be seen for each game in the chart. While the pandemic increased overall hours watched for games in 2020 and 2021, the same peaks in viewership aren’t seen until a game gets a PC release or something similar.

Bungie’s Destiny franchise will offer Sony a way to amass a consistent, loyal fan base who regularly tunes into a game’s streaming content as new DLC is released.

To learn more about how Stream Hatchet can help you enhance your marketing campaigns with gaming influencers and esports teams, sign up for a free trial today.