Oreo is the Most Chatted About Brand on Twitch – July 2022  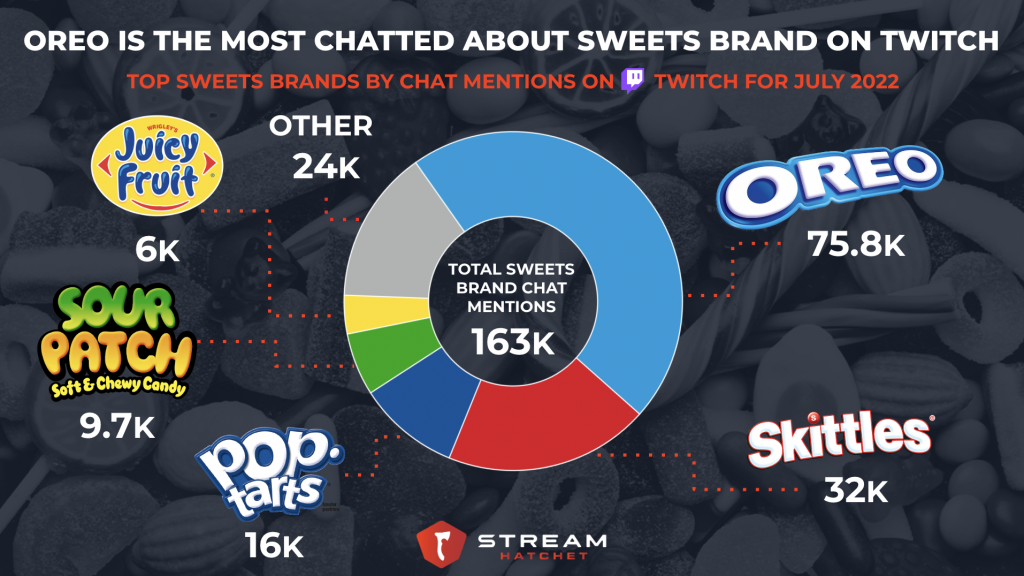 Candy, cookies, and other sweets are popular with most age groups. While fast food and chips might be some of the most chatted about food categories among gamers and live streaming viewers, sweets are right behind them. Quick, sugary treats are perfect for gamers who are staying up late and playing high energy games.

Sweets brands had 163k Twitch chat mentions last month. Popular cookie brand Oreo dominated the charts with almost half of that chatter at 75.8k mentions. While Oreo hasn’t done any sponsored streams in recent months, their large number of chat mentions seems to be from their organic popularity among the live streaming community.

Skittles was the next most talked about sweets brand in Twitch chat last month with 32k mentions. Pop Tarts, Sour Patch, and Juicy Fruit followed with 16k, 9.7k, and 6k mentions, respectively.

The campaign series lasted several weeks, with all four streamers hosting individual streams to promote their flavor and limited edition packs of the candy. Near the end of the month, the four participated in a Rocket League tournament to battle and see who the “top flavor” would be. Most of the Sour Patch brand mentions came from these four Twitch channels, and boosted the brand’s engagement by 7% from June 2022.

Twitch creators and other live streaming personalities have quickly become brand ambassadors in recent years, with some gaining celebrity status like athletes, actors, and musicians. Activating in live streaming and esports is a great way for a brand to reach a younger, active audience. Additionally, working with Twitch creators who already have a well-established, dedicated audience can help boost impressions and give the brand credibility.

To learn more how your brand can accurately measure impact in the live streaming community and activate and optimize campaigns efficiently, drop us a line: