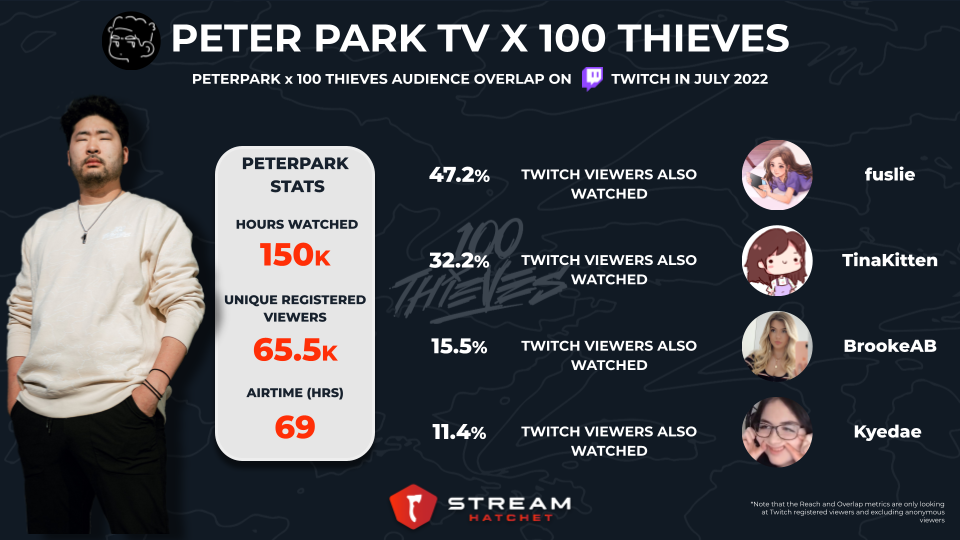 Who is Peter Park

Peter Park is a popular Twitch streamer who joined the esports organization 100 Thieves as a content creator, part of their continuous effort to develop compelling content fueled by influencers.

Peter had a late start to his Twitch Career. In October of 2018, Peter became an official Twitch Partner at the age of 28. Two months later, he participated in Streamer Camp, a 3 day event meant to give more exposure to smaller streamers, that was organized by popular Teamfight Tactics streamer Boxbox and soon to be fellow 100 Thieves member Fuslie. However, Peter’s growth would skyrocket in August of 2020. This growth was triggered from playing Among Us and the morning lobbies that he would be invited to. That August, Peter Park would generate 695K hours watched, with 233K of those hours coming from Among Us streams.

Peter Park has a dynamic personality while on stream. At times Peter can be very monotone and sarcastic, but there are a plethora of moments where he can be very loud and dramatic. With a healthy mix of wholesome moments and edgy jokes, Peter Park is constantly looking to find new ways to entertain his audience.

Peter’s content tends to be directed towards a more casual Twitch audience looking for community and interactions between the chat and the streamer.

Peter Park credits Fuslie for introducing him to live streaming. The two were friends prior to live streaming, and Peter began building an audience within Fuslie’s community. This is a key factor for the 47% of his viewers that were also viewers of Fuslie in July. Tapping into the on-stream chemistry the two have can be an effective way to increase audiences engagement with activations.

In picking up Peter Park, 100 Thieves is making a conscious effort to diversify the content available to their overall audience. The organization has already taken the first step in doing so, by pairing an unlikely streaming duo for a podcast entitled “Boomer vs Zoomer.” Kyedae, a popular female streamer with 1.8 million followers on Twitch, joins Peter Park to discuss trending topics and give perspectives from two different generations. With only 11% of Peter’s viewers also watching Kyedae, there is a major opportunity for 100 Thieves to introduce new audience members to the creator pair, growing the total addressable audience for the esports org.

Connecting outside of 100 Thieves

Peter has also connected with other streamers outside of 100 Thieves. He built a relationship with content organization OfflineTV’s members including Edison Park (former manager) and DisguisedToast, and his audience. Over 50% of Peter’s audience also watches Disguised Toast, a livestreamer with 2.7 million followers. Like Peter, Toast also is a host of OfflineTV’s OTV Podcast.

This is great for brands who are looking to activate within 100Thieves, but want to target an audience similar to Disguised Toast. It will also be very interesting to see how these two organizations begin to add podcasting into their content mix.

If you’re looking to improve your marketing strategies in live streaming you should sign up for a Free Trial of our Essentials Dashboard!