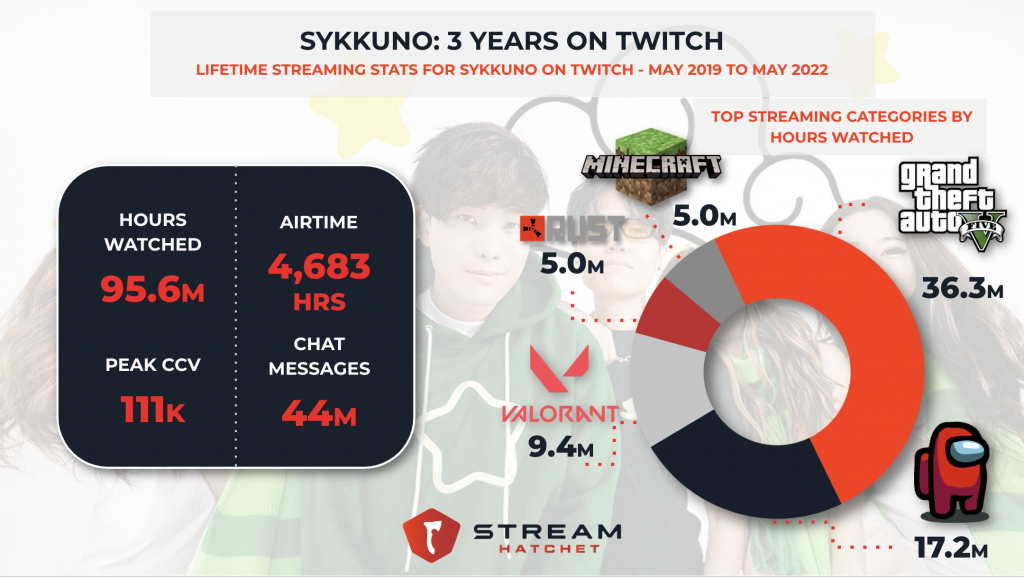 After three years on Twitch, Sykkuno announced he is switching to YouTube Gaming.

May 1st was dubbed “Sykkuno Day” by streamers and fans to celebrate his streaming milestone. His Twitch stream featured a Minecraft speedrun with streamer friends, including Valkyrae, Ludwig, Disguised Toast and more. At the end of the stream, he thanked his fans for their support.

This last stream, which lasted just over 7 hours, got 122k hours watched and a peak viewership of 30.6k concurrents. However, the next day, Sykkuno announced in a video that he would be continuing to stream, just on another platform: YouTube.

To commemorate his final day on Twitch, Stream Hatchet is taking a look back at Sykkuno’s top streamer stats for his three-year history on the platform.

In 3 years on Twitch, Sykkuno streamed for 4,683 hours and garnered 95.6 million hours watched. In that time, his fans sent over 44 million chat messages on his channel.

Sykkuno’s top streaming category was, undoubtably, Grand Theft Auto V. GTA V had over 36 million hours watched, or a third of his total streaming hours. His most popular stream was a GTA V stream on May 11th, 2021. He reached a peak concurrent viewership of over 111k viewers and almost 850k hours watched.

His next most popular game was Among Us, which had over 17 million hours watched, or 20% of his total streaming hours. He played Among Us during some of his most popular streams with his friends Valkyrae, Disguised Toast, Corpse Husband, and others.

Subscribe to our newsletter to get more live streaming insights delivered directly to your inbox every Friday morning.

To learn more about Stream Hatchet’s capabilities in live streaming analytics and what marketing goals we can help your business achieve, chat with us!