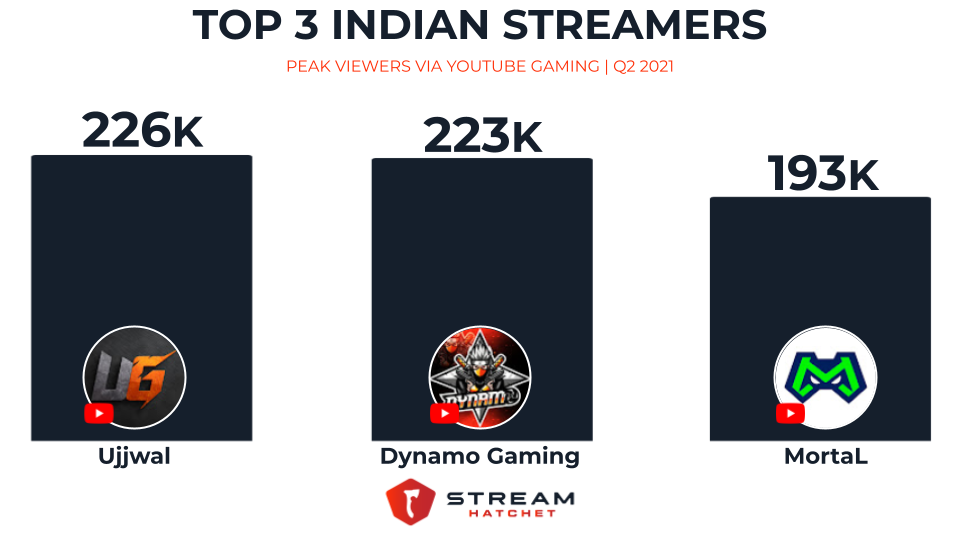 The global gaming and esports industry saw a boom in 2020, a majority of this due to the pandemic lockdown. While understanding the global opportunity around gaming and esports, it’s important for marketers to dive into regional trends to effectively tailor content to focused audiences.

India is one region that has experienced significant growth with its gaming audiences, coinciding with record-breaking smartphone shipments earlier this year. Additionally, a recent report from Niko Partners noted that Asia accounts for more than 54% of the $1 billion dollar global esports market.

Western esports organizations are taking note of India’s growth potential. Team Vitality has become the third tier-one western organization to expand into India. They signed 4 content creators onto their roster in late 2020.

Back in August 2020, India led streaming viewership on YouTube Gaming for PUBG Mobile. The Indian government’s ban on PUBG Mobile back in September 2020 stalled India’s esports and gaming growth for a short period. However, the industry has adapted with the creation of BATTLEGROUNDS MOBILE INDIA.

Here’s a look at key insights within the gaming and esports industry for India:

One of the youngest Indian streaming influencers, 18-year-old Ujjwal made a name for himself by primarily streaming speed runs for the hit sandbox game, Minecraft. Overall, Ujjwal experienced a 725% increase in average concurrent viewers since July 2020.

Additionally, Ujjwal has another popular channel on YouTube Gaming, Techno Gamerz with over 18M subscribers currently. While Ujjwal is more for live streaming and connecting with viewers, Techno Gamerz is a VOD channel focused more on technology and gaming ‘How-Tos’ in Hindi.

Aditya Deepak Sawant, better known as Dynamo Gaming, is currently the second most subbed Indian YouTube Gaming Channel with over 9M subs. Since 2017, Dynamo Gaming has made a name for himself within the PUBG Mobile gaming community. At one point, he was ranked among the top PUBG Mobile players in Asia at #85.

BATTLEGROUNDS MOBILE INDIA had a record-breaking launch with 34 million players within a week. On opening weekend, Dynamo Gaming experienced the 2nd highest peak viewers for the game. His uptick in average concurrent viewers will likely continue with the announcement of the first BGMI tournament hosted by Krafton. Qualifiers will begin on August 2nd.

With over 6M subscribers on YouTube currently, Naman Mathur, AKA MortaL, is another familiar face to the PUBG Indian gaming community. For the 2020 Esports Awards, he came in third for ‘Mobile Player of the Year 2020’ and was a nominee for YouTube’s most successful live streamers of the year.

Similar to Dynamo Gaming, MortaL had to find other games to focus his content creation on thanks to the PUBG Mobile India ban. For a while, streaming viewership numbers weren’t like before, and he suffered a 60% decrease in average concurrent viewers. However, in the last 90 days, MortaL has experienced a 205% increase thanks to the rising popularity of BGMI.