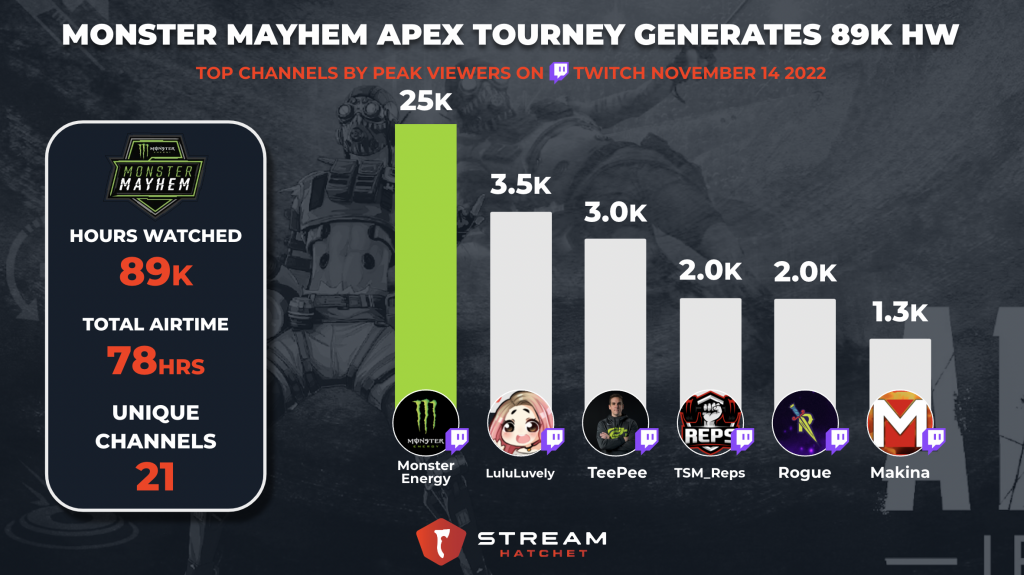 Monster Energy partnered with EA for an Apex Legends tournament this week called “Monster Mayhem,” which garnered 89K hours watched across live streaming platforms. The tournament featured 12 squads competing for a $100,000 prize donated to the winner’s charity of choice.

The teams consisted of 2 Monster teams featuring popular live streamers LuluLuvely, TeePee, and Rogue; 5 influencer teams; and 5 Apex community teams. The community teams were made up of community members who earned their spots during a play-in tournament from November 10th – 13th.

The main event, hosted Monday, November 14th, was live-streamed on Monster Energy’s official Twitch channel. The main broadcast garnered the most viewership across live streaming, with just under 44K hours watched and 25K peak concurrent viewers. 20 other channels co-streamed the event, with LuluLuvely and TeePee taking the next top spots with 3.5K and 3K peak viewers, respectively.

The tournament was a unique activation, and the first of its kind from Monster Energy and Apex Legends, who have been partnered since 2021.

Apex Legends was able to tap into their competitive gaming audience by providing them a tournament to test their skills among their peers while also getting the opportunity to compete against professional streamers adding another incentive for those who look to see how they stack up to the pros.

On the other hand Monster Energy was able to capitalize on the casual viewers of Apex Legends by driving more awareness and engagement to the broadcast of the tournament hosted by their brand Twitch channel.

The activation also included other Monster related prizes besides the $100,000 charity prize. There were also drops enabled throughout all broadcasts for the streamers participating in the event, where the viewer can link their Twitch and EA account to redeem digital in game prizes.

There was however, a missed opportunity for Monster Energy to maximize their brand’s awareness. A common practice with brands activating streamers to participate in their events and tournaments is the use of banners and overlays throughout the streamer’s broadcast. By doing this Monster Energy could have increased their brand presence with the audiences of all the participating streamers, which made up 45 of the 89 thousand hours watched (over 50%).

The tournament concluded with Team Reps consisting of TSM_Reps, claraatwork, and sYnceDez claiming victory. Reps donated his $100,000 to the Humane Society.

To learn more about how your brand can utilize Stream Hatchet’s powerful data analytics for your live streaming activation, schedule a free demo with one of our experts.