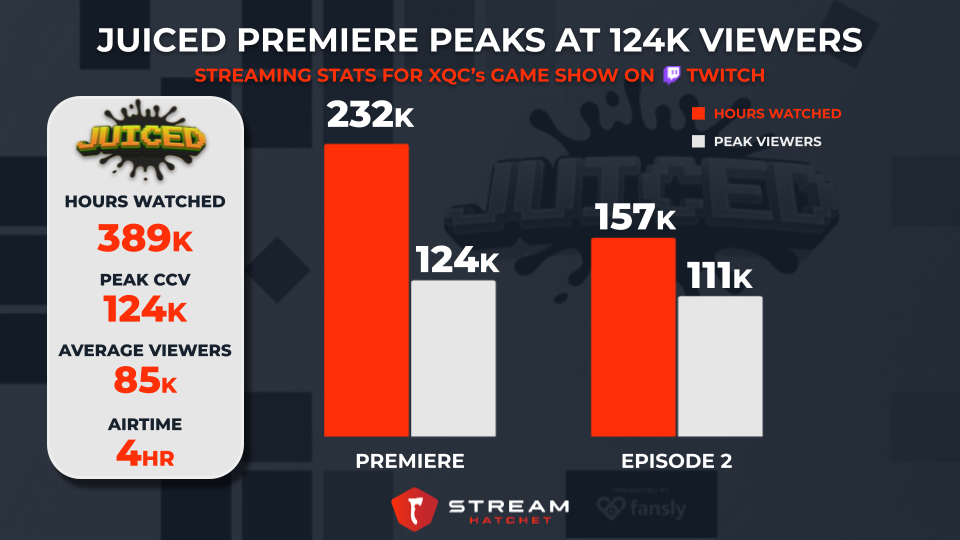 The newest creator-made game show, Juiced, made its debut on September 30th to a peak audience of 124K viewers. The show, hosted by top Twitch streamer xQc, is a Nickelodeon-style game show featuring other top creators like kyedae and Sykkuno competing in challenges to avoid getting “juiced” with green slime.

The Juiced game show is the first production from newly-formed creative agency, OFFBRAND. The agency was started by popular YouTube creator Ludwig Ahgren along with two of his fellow content creators Brandon “Atrioc” Ewing and Nathan Stanz, and long-time buisness partner Nick Allen.

OFFBRAND is an agency built to assist livestreamers in creating an impactful streaming experience. Ludwig, who has past experience creating large productions like Mogul Money and an upcoming chess boxing tournament, is the creative brains behind the business. The company also calls on the business savvy of Stanz and Nick Allen (past COO of Loaded) and the marketing expertise of Brandon Ewing, who previously worked as a Marketing Specialist for Twitch and NVIDIA. The co-founders of Offbrand are looking to tackle all aspects of creating these large scale events, from creating the ideas to finding sufficient funding from sponsorships.

Special Events as a category in live streaming has been growing in popularity in the last few years. From January to August of 2022, Special Events on Twitch has generated 82.5 million hours watched on the platform. Additionally, the number of content creators behind these special events is only increasing. With recent events like Shit Camp from QT Cinderella, The Sidemen Charity Match, and Ludwig’s poker tournaments, IRL events featuring content creators are driving the non-gaming side of live streaming.

When looking at Ludwig’s Top Sessions based on hours watched, His marathon streams playing Elden Ring and Pogostuck stand above others in 2022. However when looking at Platform Share percentage, it’s actually his Mogul Money Live & Poker Events that hold the top spot. Even though there was more watch time during the longer streams, Ludwig was able to draw in more eyes across the entire platform during these larger events.

As brands continue to experiment with partnerships and advertising in live streaming, creator-driven events are providing them with countless opportunities to put their sponsorship dollars. And with the viewership that events like Juiced are getting, they seem to be a lucrative option for brands. While Juiced has 4 more episodes planned, it will be interesting to see whether or not Offbrand is effective in changing the streaming landscape for all types of creators.

If you want to stay updated on the latest streaming and esports news every Friday, subscribe to our newsletter