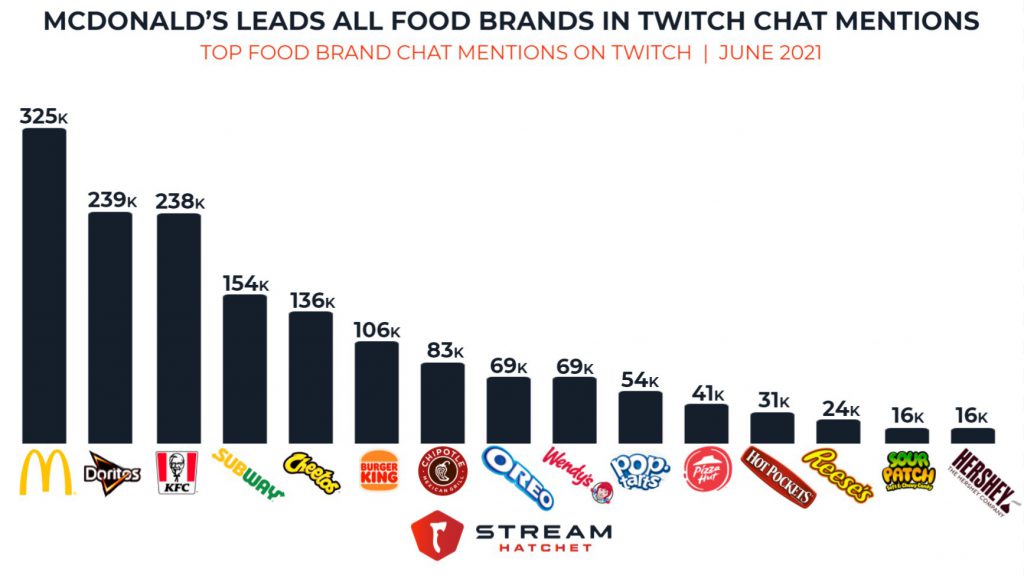 Live streaming platforms are a great testing ground for consumer reception to new products and overall feelings on a brand; a virtual focus group. Moreover, Twitch chat is home to thousands of virtual public focus groups happening simultaneously. Thus, allowing brands to not just measure feedback on their own products, but on their competition.

Out of all the food brands for the month of June, McDonald’s generated the most Twitch chat mentions at 325K. A solid amount of the chatter was surrounding the recent ad featuring popular Twitch streamers and married couple itshafu and dogdog. The ad featured the two enjoying the new crispy chicken sandwich together on Twitch.

Earlier this year, McDonald’s Southern California became an official marketing partner of LAFC Gaming, the esports division of Los Angeles Football Club. As part of the partnership, McDonald’s serves as the presenting partner for LAFC’s brand-new gaming room located in their headquarters.

Around the same time, McDonald’s Happy Meals were flying off the shelves for a chance to collect rare Pokémon cards. The promotion was in celebration of the 25th anniversary of Pokémon Pocket Monsters. Four Pokémon cards were included with each meal out of a 50 card set. Unsurprisingly, the promotion sold out fast, with many content creators filming themselves opening dozens of packs.

One such meme is the KFConsole in partnership with Cooler Master. Announced in late 2020 following the PS5 and Xbox console releases, KFC joked on Twitter that “the console wars are over” with the launch of their very own gaming system. The bucket-shaped console not only included 4K capability and VR compatibility but also a built-in “Chicken Chamber” made for keeping KFC orders warm.

In 2019, following the success of the popular “Dream Daddy” dating simulator game, KFC launched their very own title, “I Love You, Colonel Sanders!” where players could court a young Colonel Sanders. Content creators like jacksepticeye, GameGrumps, and ItsFunneh all made videos playing the game which helped generate tons of buzz for the KFC brand.

Chipotle’s average demographic aligns perfectly with the typical gamer age range, Gen Zs and Millennials. Acknowledging this, Chipotle continuously leverages all aspects of live streaming, from influencers to esports. Chipotle has been featured twice in Stream Hatchet’s #Ads of the Week, with TimTheTatman securing the number one spot from his participation in the 2020 Chipotle Challenger Series.

Launched in 2019, The Chipotle Challenger Series was part of a partnership deal with DreamHack and ESL. The on-site events at DreamHack Dallas and DreamHack Atlanta allowed attendees to compete for a custom trophy, a card that grants them a year of free Chipotle, and merchandise.

Since the success of the inaugural year, Chipotle continues hosting the series, with the current 2021 season highlighting four PUBG mobile events and $70,000 in grand prize money. Chipotle’s ongoing success with live streaming viewers is emphasized by the 83K chat mentions in June of 2021, when Chiptole become one of the first brands to join the Official Marketing Partners program for /twitchgaming.

On June 25th, T-Pain made a comeback to the program with a sponsored stream playing Gartic, a drawing guessing game. The stream generated over 4K hours watched with 2K peak viewers.

Back in 2019, Pizza Hut and EA Sports made a historic deal for the naming rights of a virtual stadium. Dubbed “The Pizza Hut Stadium,” the in-game arena could be seen during the Madden NFL 20 Classic event. Pizza Hut’s innovative marketing campaigns helped generate 41K Twitch chat mentions in June.

For this list, Hershey’s generated the least Twitch chat mentions for June with 16K mentions. In the past, Hershey’s had a major brand presence in gaming and esports. In 2018, Hershey’s partnered with popular streamers Ninja and DrLupo to celebrate the launch of Hershey’s Milk Chocolate Bar with Reese’s Pieces at TwitchCon. This was Hershey’s first campaign in the gaming industry and back then it was a huge risk for a non-endemic brand to take.

Back in 2019, Kit Kat signed their first esports partnership with The Los Angeles Valiant, a professional Overwatch team. This partnership gave them the naming rights to Rivalry Weekend along with branded content for streaming and social media. With Hershey’s established brand power, it’s safe to assume it would not be difficult for them to get back on top.