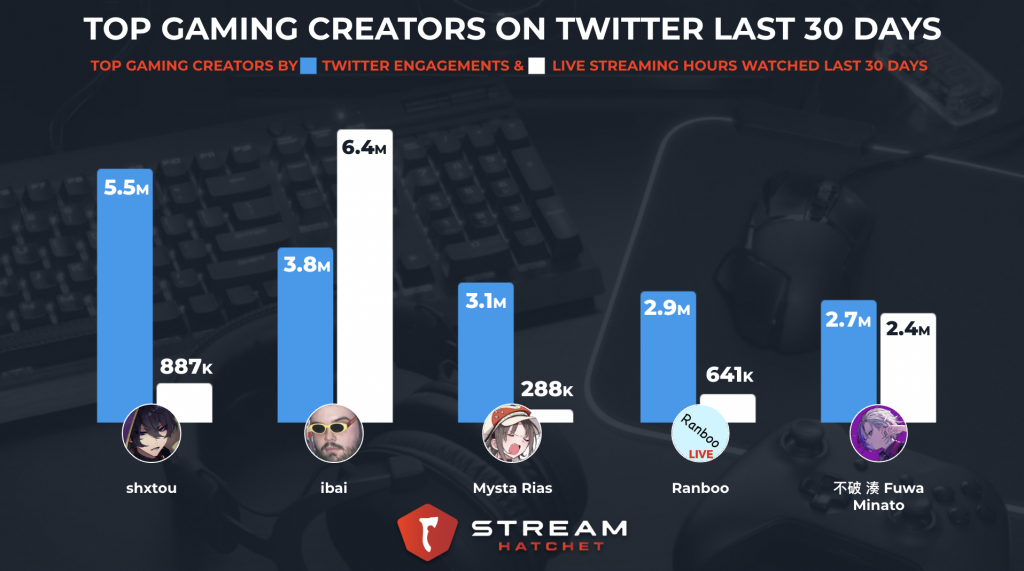 Twitter is an essential communication tool for gamers to keep their fingers on the pulse of gaming media. Whether it’s a Game Publisher, Tournament Organizer, Esports Org, Gaming Creator or Fan, everyone is using Twitter.

While there is a fairly obvious connection between Twitter and streaming platforms like Twitch & YouTube as a means to grow hype around future streams, the practice has never been critically examined from a data driven perspective.

What Stream Hatchet has noticed is that performing well on live streaming platforms like Twitch and YouTube doesn’t necessarily translate to having high Twitter engagement, and vice versa.

Popular gaming creator ibai has a much higher viewership in live streaming, garnering 6.4 million hours watched in the last 30 days. He’s also second in the top charts for Twitter engagements with 3.8 million.

While shxtou has only 1.1 million followers on Twitter, he was able to garner higher engagements on the platform than ibai, who has 10.7 million followers. Part of this difference has to do with the frequency of the tweets: shxtou tweeted almost double the amount of ibai in the last 30 days.

The two creators use their Twitter accounts similarly, to both talk about relevant gaming news, engage with their followers, and promote their upcoming live streams on Twitch. Shxtou has 837K followers on Twitch, while ibai has almost 12 million. This discrepancy in follower counts impacts viewership on the platform as well.

It’s interesting to observe that while shxtou has 1.1 million followers on Twitter, he has almost 200K fewer followers on Twitch, meaning that his audiences on the two platforms are slightly different. Crossover between Twitch and Twitter exists, but since the two social platforms showcase different content and are used in different ways, they can also be used to help promote and uplift one another on individual creator accounts.

Subscribe to our weekly newsletter, with gaming, esports, and live streaming news coming straight to your inbox every Friday morning!