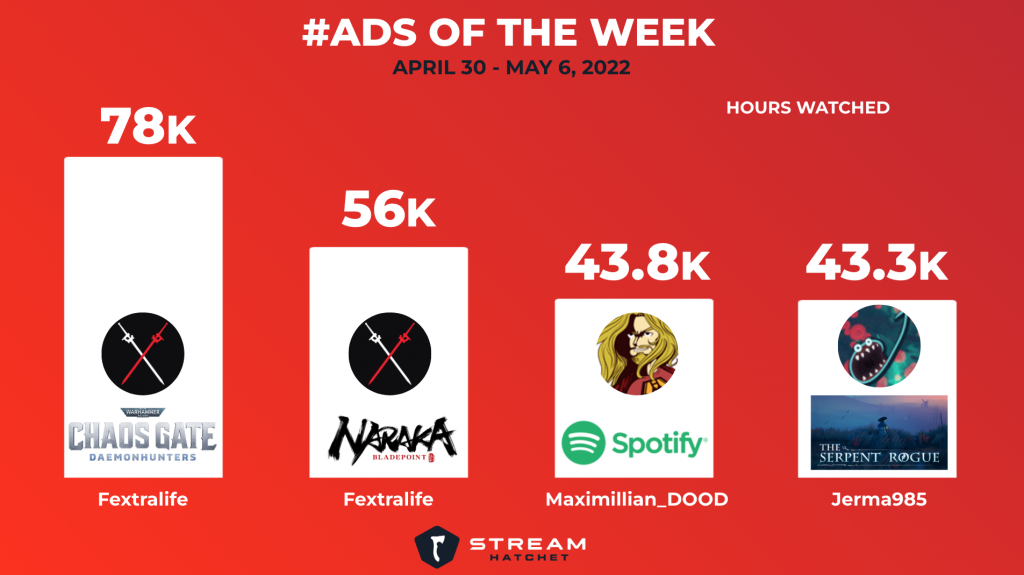 For this week’s #Ads of the Week, we’re doing the top 4 ads instead of 3 as an extra bonus, since #3 and 4 were extremely close. This week’s sponsorships were dominated by game advertisements, with Spotify sneaking into #3.

Fextralife took the top two spots this week with their sponsored streams from two different video games. Their sponsored stream with Warhammer 40,000: Chaos Gate – Daemonhunters got 78k hours watched. The turn-based tactical RPG was released last Thursday and is the latest installment in the Warhammer 40,000 series. Fextralife was one of the game’s drops partners, which offered limited edition items to those who watched a portion of the stream.

Fextralife also came in second for our live streaming #Ads of the Week rankings for their sponsored stream with Naraka: Bladepoint with 56k hours watched. The battle royale game, released last summer, has seen their weekly hours watched drop from about 2.1 million around the release to about 100k average this year. However, marketing pushes like free to play weekends and collaborations have seen their hours jump significantly. During the last free to play weekend, when Fextralife was sponsored, Naraka a jump to about a half million hours watched on live streaming. During holiday 2021, the game released a special Bruce Lee skin, bumping hours watched again to over 500k. Sponsoring popular streamers like Fextralife has obviously had a significant impact on the game’s watchtime, helping their overall awareness in the gaming community.

Maximillian_DOOD came in third place for his sponsored stream with Spotify last week. The stream garnered 43.8k hours watched and promoted the new Batman Unburied audio series, which tells a new Batman story from the DC universe. The podcast, which has had a ton of recent hype, just dethroned “The Joe Rogan Experience” from the #1 spot on Spotify last week. Spotify has been increasingly active in the video game and live streaming spaces, especially since their Roblox partnership which launched last week as well.

And in 4th place for this week’s #Ads of the Week is a newcomer to the leaderboard, Jerman985. His first ever sponsored stream was with the game The Serpent Rogue, which garnered 43.3k hours watched. The Serpent Rogue was created by Sengi Games and published by Team17, the British indie game developer and publisher behind the Worms and Alien Breed series. Released at the end of April, it’s billed as a mystical, botanical action-adventure game. You play as The Warden and master the art of alchemy to defeat a dark force, The Serpent Rogue.

For more insights delivered directly to your inbox every Friday, sign up for Stream Hatchet’s newsletter.

To learn more about how Stream Hatchet can help you amplify your business’s video game live streaming marketing plan, drop us a line!