Another Crab’s Treasure Makes a Splash at Indie World Showcase 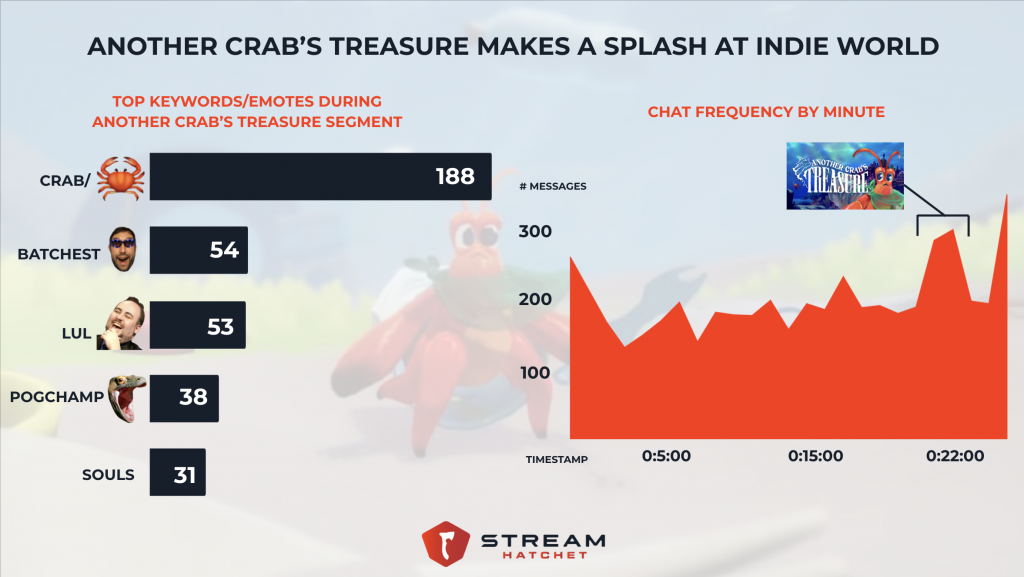 Nintendo’s first Indie World Showcase of 2022 premiered on Wednesday, May 11th. In the 26-minute broadcast, Nintendo aired trailers for 12 upcoming indie games, and short announcements for another 7. Across its two broadcasts on both Twitch and YouTube, Indie World Showcase garnered 46k hours watched with a peak viewership of 83k viewers.

During the Indie World broadcast on Twitch, 1,593 of the 12,331 unique viewers participated in the chat conversation. Chatters sent a total of 5,324 messages for an engagement rate of 13%. As expected, a bulk of those messages were sent at the beginning and end of the broadcast, as chatters discuss what’s to come as well as recap the event. However, a spike in the number of chat messages were sent during the 3-minute trailer for an upcoming game called “Another Crab’s Treasure” from Aggro Crabs.

812 or 15% of the total chat messages were sent during the “Another Crab’s Treasure” section. The top keyword with 188 mentions was “crab” or the crab emoji. The next three top keywords were all popular Twitch emotes: batchest, LUL and PogChamp. While batchest and LUL are sometimes used in a sarcastic manner, PogChamp has an overwhelmingly positive sentiment.

Finally, the 5th most-mentioned keyword with 31 mentions was souls. Many viewers were comparing the game to Elden Ring and the Dark Souls franchise, as the premise has the main character (a hermit crab) fight and defeat larger enemies in a soulslike manner.

For the rest of the Showcase, many users were wondering about the status of the new Hollow Knight: Silksong game. The keyword “silksong” was mentioned 288 times during the 26-minute broadcast and was the third top keyword. Another popular game viewers were chatting about was TABS or Totally Accurate Battle Simulator, which was mentioned 34 times. It was announced that the game would be coming to the Nintendo Switch.

Devolver Digital Games also made a splash, with two games premiering at the Showcase. The Cult of the Lamb and Card Shark, two new games from Devolver, were announced during Indie World. In total, Devolver and its two games had over 45 mentions in Twitch chat.

To learn how your video game publishing team can utilize Stream Hatchet’s live streaming chat analysis data, drop us a line and schedule a free demo of our products!