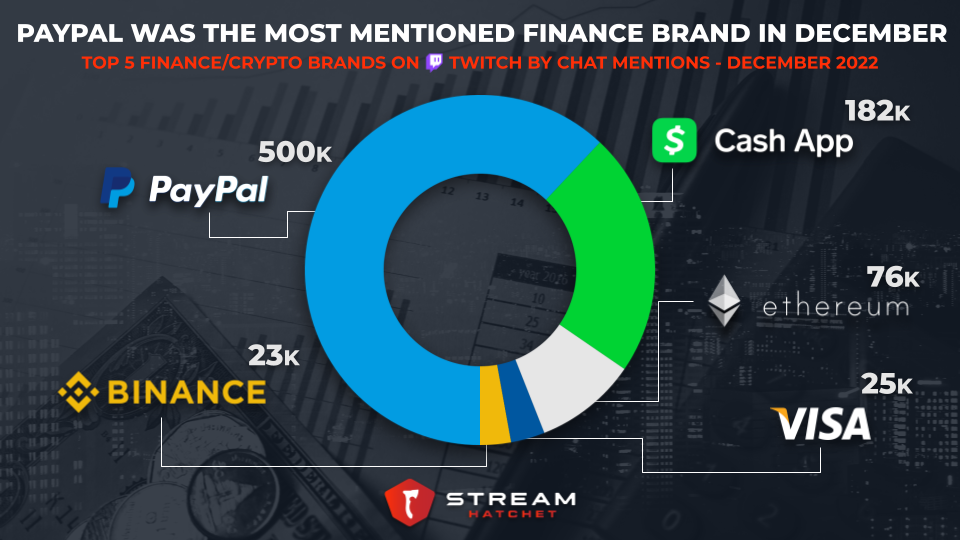 Twitch and live streaming platforms have always been a place where people have discussed finance-related topics, especially crypto currencies. In the last few months, The Crypto market has continued to experience turbulence, prompting discussions on Twitch. In addition, the IRS is invoking changes that will affect services like Venmo, PayPal, and Cash App in the United States.

Twitch can be a great place to understand the general consensus and divide over trending topics in the younger generation. Twitch viewers are generally 18-34 years old, and are fans of gaming, tech, and other similar niches. Understanding your brand’s popularity and sentiment among this demographic is powerful in developing a marketing strategy.

The most chatted about Finance Brand was PayPal which clocked in at 500K chat mentions in December. The Digital Finance service provides an online payment system that is accessible in many countries across the world. This service allows you to transfer money digitally, quickly, and safely online.

Cash App was the second most popular brand for December generating 182K chat mentions. Cash App is a mobile focused payment service that operates in the United States and the United Kingdom. In 2021 Cash App was reported to have 70 million active users becoming one of the most popular financial services.

PayPal and Cash App have become a hot topic of discussion. This is due to the IRS’s changes that will require services like PayPal and Cash App to file taxes on transactions over $600. In December the IRS announced that these changes won’t be put in place until 2023. So those who would be affected can rely on the previous benchmark before having to file a 1099-K tax form.

Ethereum generated 76K chat mentions becoming the third most talked about finance brand, and the most talked about cryptocurrency on Twitch. Ethereum is a digital currency that is run on an open-source blockchain. Among all crypto coins, Ethereum and Bitcoin are considered to be the market leaders.

Binance was the fifth most talked about finance company generating 23K chat mentions in December. Binance is a crypto currency exchange platform similar to Coinbase where you can trade crypto currencies like Bitcoin and Ethereum.

Crypto currencies have become a polarizing topic on platforms like Twitch. While some still have hope that the industry will be able to recover. Some consumers and influencers have expressed how the industry needs to become more regulated before they can buy in.

Visa was the fourth most mentioned Finance Brand on Twitch in December clocking in 25K chat mentions. The multinational corporation helps businesses and consumers transfer funds throughout the world using Visa credit cards, debit cards, and prepaid cards. In the United States Visa is the most widely used service for banks issuing credit and debit cards making the company one of the most valuable companies in the world.

If you are looking to activate in the livestreaming space you should sign up for a free trial of our platform.