Tl;dr: Bitcoin, the face of crypto, continues to lead cryptocurrency buzz with over 188K Twitch chat mentions during July. 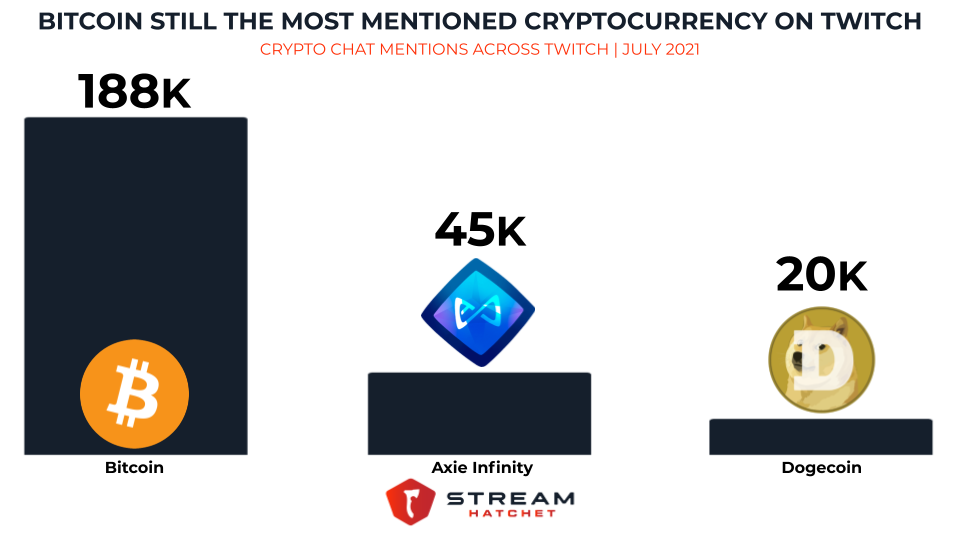 As reported in an earlier Stream Hatchet blog, the trend of cryptocurrencies continues to grow online. Live streaming sites, like Twitch, remain a popular forum to discuss the topic. The growth of online crypto-casinos has also pumped the mentions of cryptocurrencies on live streaming sites. Popular streamers like Trainwreckstv have held sponsored streams showcasing online gambling and, inevitably, generating chatter about the coins.

Additionally, Twitch’s “Crypto” category has seen major growth this year. Since January of this year, the category experienced over 10M hours watched, with over 2M of those hours in May alone. During that month, there was tons of buzz surrounding crypto. Elon Musk announced that Tesla would no longer accept bitcoin as payment. Plus, Chinese officials launched a crackdown on crypto use in the country.

Today, Twitch announced a ban on affiliate links and referrals for online gambling. This comes after months of heavy criticism on the ethical responsibility live streaming platforms have in regards to promoting crypto. It has yet to be seen how this ban will affect streamers on Twitch who have been heavily involved in crypto-sponsored streams as the trend continues to grow its impact on mainstream culture.

Here are the top 3 cryptos by Twitch chat mentions during July 2021:

Bitcoin is widely considered the face of cryptocurrency and the trend-setter for fellow crypto. Even Twitch began to accept Bitcoin as a form of donation currency. This led to a streamer receiving $200,000 in Bitcoin donations during a stream in May.

Bitcoin has had such a cultural impact over the past few years, it has its very own Twitch category, separate from crypto. Since January of 2020, the Bitcoin Twitch category has generated over 506K hours watched. A majority of the viewership was experienced in 2021 with the rise of Stake.com sponsored streams that last for hours.

Although more crypto has been introduced since Bitcoin’s creation, it still reigns as the leader of crypto with a solid 188K Twitch chat mentions.

Launched in 2018, Axie Infinity is a popular NFT blockchain game inspired by the massively successful Pokemon game series. Players can collect, raise, battle, and trade digital pets, called Axies. As of August 2021, Axie is one of the top three most popular gaming DApps by user counts — with over 100,000 unique weekly users.

Since the start of 2021, Axie Infinity has generated over 4M hours watched across live-streaming platforms. Many financial analysts are looking to Axie as the future of gaming and crypto, with a focus on play-to-earn instead of free-to-play.

Axie Infinity is on its way to mainstream popularity with over 45K Twitch chat mentions in July.

If Bitcoin is the face of crypto, Dogecoin is the face of meme coins. Created as a joke based on the 2013 Doge meme, the crypto gained mainstream popularity when Elon Musk began promoting the crypto on his Twitter. Since January 2021, Dogecoin has generated over 1.5K stream titles across Twitch, Youtube Gaming, and Facebook Gaming. 431 of those stream titles occurred during May when Elon Musk hosted SNL and joked that crypto was “a hustle.”

On October 9th, the first-ever Dogecoin festival, Dogepalooza, will take place. The festival will celebrate the community of Dogecoin by bringing fans together. Additionally, there’s talk of superfan Elon Musk using Dogecoin as the primary currency for his SpaceX and Geometric Energy Corporation (GEC) partnership project which allows advertisers to place ads in space.

While meme coins continue to rise in value and popularity, Dogecoin leads the movement with over 20K Twitch chat mentions during July.