Tl;dr: Recently, car brands like Honda have become widespread in the gaming industry and are racing towards sponsorship deals that promote brand affinity. 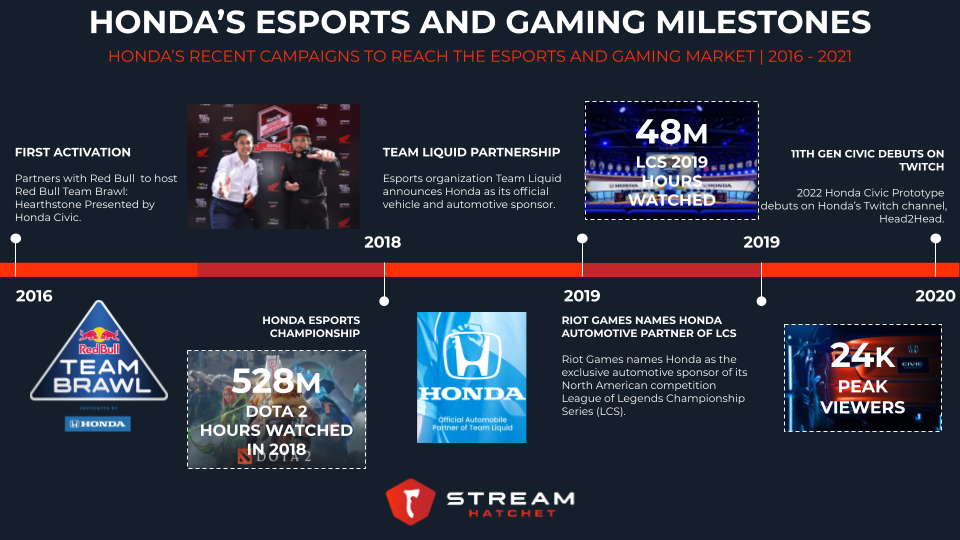 In recent years, automotive brands like Toyota, Audi, and Honda have become widespread in the gaming and esports industry. Car manufacturers are racing towards sponsorship deals that promote brand affinity. Particularly, brand partnerships on live streaming platforms help push the idea that the newest car models are synonymous with youth, gaming, and the “drive” to success.

Honda, in particular, has been successfully activating within the industry for years, going as far back as 2016 when they partnered with Red Bull to host a gaming tournament for Hearthstone. From partnerships with esports teams, events, and even creating their very own Twitch channel, Honda has become a leader for car brands in gaming and esports.

Here’s a look at the benchmarks of their esports and gaming partnerships:

Back in 2016, Honda partnered with a fellow brand leader in gaming and esports, Red Bull. This partnership aimed to create the first teams-oriented event for Hearthstone, Activision Blizzard’s popular card game. While it’s known as a strategic game for individuals, the Red Bull Team Brawl: Hearthstone Presented by Honda Civic event required teams of three to work together to build three decks from a limited set of cards.

By positioning themselves as the main sponsor for a popular video game event, Honda trusted the power and influence of live streaming to reach their target audience of young, tech-savvy gamers.

Moreover, Team Liquid, who named Honda their official vehicle and sponsorship back in 2019, began tying in their Honda brand deal during LCS through short videos encouraging fans to “find their drive.”

Since its 2015 launch, the Honda Civic is the most popular vehicle with Millennials, Gen Z, and first-time new car buyers. Because of this popularity, Honda wants to retain the younger generations through new mediums like Twitch. This made it an easy decision for Honda to debut the 2022 Honda Civic Prototype on Honda’s Twitch channel, HondaHead2Head.