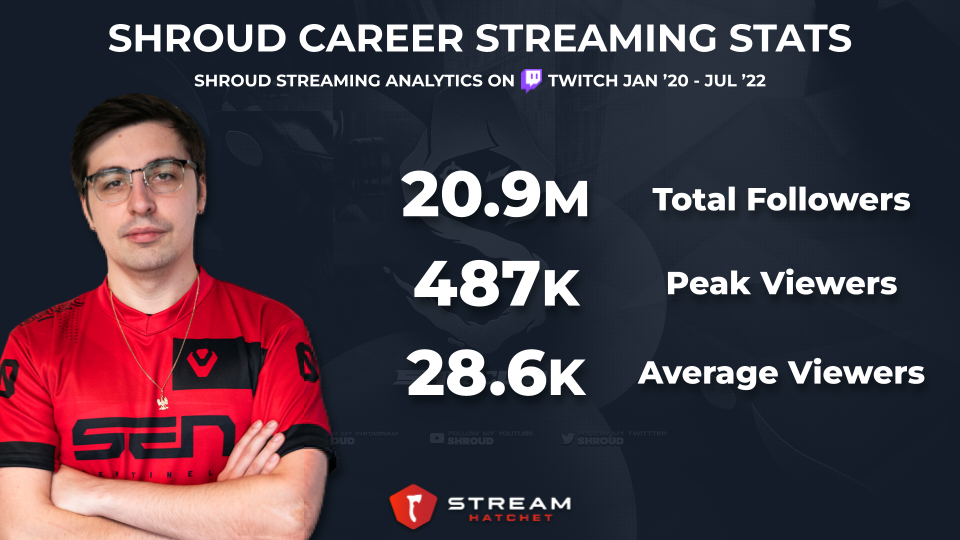 Michael Grezesik, better known as Shroud, is a living legend in esports. Shroud is a former professional CS:GO player and currently is a professional Valorant player for the Sentinels.  Outside of esports Shroud has amassed over 10 million followers on Twitch and over 6 million subscribers on YouTube.

Shroud was raised in Mississauga, Canada where his father, a PC building enthusiast, introduced Shroud to one of his favorite games Counter Strike at an early age. Eventually Shroud would explore the world of Twitch where he would watch summit1g who Shroud credits as his inspiration to start livestreaming. His first stream began in 2011 where Shroud would stream to a very small audience for the next year.

Shroud began his esports career in 2013 competing with a variety of ESEA teams like Exertus eSports and Manajuma. After many impressive performances, compLexity Gaming contacted Shroud about an opportunity to play.  Ultimately, Shroud signed to compLexity gaming and soon after, compLexity’s esports team was purchased by Cloud 9.

Shroud made his debut with Cloud 9 in 2015 during the ESL ESEA Pro League where Cloud 9 would go on to win the North American Bracket and place 2nd in the International Finals. In 2016 Shroud and Cloud 9 defeated SK Gaming in the ESL Pro League Season 4 Finals.

Shroud retired from professional CS:GO gaming in 2017 in order to focus on streaming.

On July 8, 2022 Shroud left retirement to play Valorant professionally with the Sentinels. He debuted for the Sentinels during the VCT 2022 Last Chance NA Qualifier Tournament, where they would fall to the winners of the tournament 100 Thieves.

Shroud has established himself as one of the greatest “pure gamers” on Twitch. With his inhuman natural ability to aim mixed with his confidence while playing, Shroud provides some of the most effortless high quality game play in all of livestreaming. Arguably one of the biggest reasons for Shrouds success is his natural ability to pick up any game and quickly become good at it. While some would attest this skill to his talent in aiming, Shroud would say that it’s his ability to adapt in any situation that is his strongest trait.

Post-retirement, Shroud started playing PlayerUnknown’s Battlegrounds and quickly became one of the best and largest players on Twitch. Shroud generated 14.9M hours watched playing PUBG from April 2017 – September 2017. He also played CS:GO along with other games like Dying Light, Fortnite, and Golf It!

Shroud’s audience has a lot of respect and admiration for him and his gameplay. Many viewers watch Shroud hoping to improve their own gameplay for first person shooters. Even esports professionals have claimed that they used to study Shroud in order to improve their skills. With such a hardcore audience on Twitch, Shroud’s following has helped him maintain his status as one of the most influencial figures on the platform.

Shroud made headlines when on October 24th, 2019 he announced that he agreed to a deal with Microsoft’s streaming platform Mixer. Shroud was the second largest streamer to sign with Mixer after Tyler “Ninja” Blevins signed his deal on August 1, 2019. Just nine months later, Mixer would cease operations, allowing Shroud to return to Twitch. Shroud’s first stream back on Twitch was August 11, 2020 and his stream peaked at over 487K concurrent viewers.

Shroud has also partnered with computer accessory company Logitech to release the Logitech G G303 Shroud Edition. The mouse was designed to be lighter and wider than the original G303 and also wireless. Shroud’s official partnership with Logitech has also included on screen banners and promotion of Logitech’s other products.

Shroud has also appeared in our Live Streaming #Ads of the Week leaderboards numerous times. Shroud has partnered with many game developers to promote upcoming releases like Naraka Bladepoint, Veiled Experts, and Zero Hour. He has also worked with non-endemic brands like Netflix and Hot Pockets.

If you’re looking to level up your marketing strategies in esports and live streaming you should sign up for a Free Trial of our Essentials Dashboard!